This is probably the most under reported story of the year hands down. If they are proven to be guilty give them the firing squad to make them feel what those innocent people who they used as target practice after Hurricane Katrina. 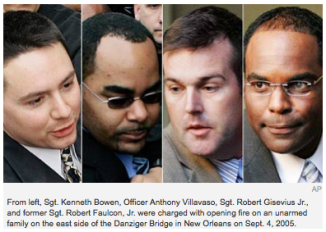 July 13) — The Justice Department today plucked more skeletons from the closet of the New Orleans Police Department, indicting six additional officers in the fatal shooting of two unarmed citizens and the wounding of four others in the wake of Hurricane Katrina.

The indictment is part of the Justice Department’s ongoing effort to expose police officers who either were involved in the Sept. 4, 2005, Danziger Bridge shootings or took part in covering them up. To date, five New Orleans officers have pleaded guilty to covering up the incident.