Based on the best-selling book, Remember the Time: Protecting Michael Jackson in His Final Days, and told through the eyes of Jackson’s trusted bodyguards, Bill Whitfield and Javon Beard. The movie will reveal firsthand the devotion Michael Jackson had to his children, and the hidden drama that took place during the last two years of his life.

Kanye has since denied that he said the “King of Pop” statement but knowing what we know of his ego, I am not surprised if he at least thought it one time.

Anyway JumpOff TV has the comparison with these two superstars head to head for the ‘King Of Pop’ title.(Don’t worry  fans we all know that nobody can take the crown from Michael Jackson)

Here is a screen shot of Kanye’ firm denial of the story.

While checking out the CNN website I could not help but to notice their partner, Time Magazine’s, “A strange, gaudy and moving farewell” headline.  James Poniewozik, who certaintly will never experience the universal love that Michael Jackson received from his fans, disgustingly found it appropriate to make sly remarks about the King of Pop Memorial Service.

“(Gordy also called Jackson “The greatest entertainer that ever lived.” Was there hyperbole? Sure. It was a memorial.),” Poniewozik writes questioning the unmatched talent and popularity of Michael Jackson.  Michael Jackson received the Memorial of a King because he was a King, not only in the realms of music but as a humanitarian.

To James Poniewozik, it is easier to see the world from a critical view but I challenge you to take a look in your mirror and make a change within yourself and the world around you.  Disrespect and sly remarks do not go unnoticed and while you focus on being negative the world Michael Jackson celebrates around you, Bill O’Rielly and Pete King.  Who will celebrate you when you are gone?

If you feel Poniewozik was disrespectful send a letter to: letters@time.com

It is hypocritical for TIME to make money off of celebrating MJ on their cover and allow these undercutting sly remarks in the same moment.

Even in his farewell, Michael Jackson has united people acoss the world and provided us with an opportunity to focus on the power of love rather than on our differences. Anyone who tuned into the live broadcast of the memorial for the King of Pop would at the very least have been moved when Paris Jackson tearfully told the world that “my daddy was the best father.”

With such a beautiful out pour of love for Michael as he is laid to rest, we cannot help but wish that he was here see and feel our embrace. What if we would have stood up for him when mainstream media sought to destroy him. Only after his death do we hear so many public professions of love and stern proclamations of Michael’s innocence against the child molestation allegations.

Even the admission of Jordan Chandler that his father pushed him to lie on Michael Jackson is not enough to shield MJ from the critics venom as we were forced to listen to damning speculations and negativity that usurped his legend in the mainstream media throughout the week. And while critics took shots, the fans persistently celebrated his life with tributes from NYC to China.

In this, I hope we learn that it is our obligation to stand up for truth and seize the moment to share our love for each other while time allows. Furthermore, we understand that we, the people, the public, have the power to shape to provoke and accomplish real change.

On June 25th we lost one of the Greatest performers of all time in Michael Jackson. Rather than spend all of our time weeping, we took to the streets to celebrate life of the King of Pop and his many contributions to us his fans!

New Yorker, Ray Fiore gets the party started on West 3rd out side of Negril when he drives up in his eccentrically painted car and begins blasting our favorite Michael Jackson hits.

For More of New York Celebrating the Life of Michael Jackson visit:

“Man in the Mirror” on West 3rd (http://www.youtube.com/watch?v=7Rm6DzKIqsQ)

“I am absolutely devastated at this tragic and unexpected news. ForMichael to be taken away from us so suddenly at such a young age, I just don’t have the words,” he was quoted as saying.

“Divinity brought our souls together on The Wiz and allowed us to do what we were able to throughout the 80’s. To this day, the music we created together on ’Off The Wall’,’Thriller’ and ’Bad’ is played in every corner of the world and the reason for that is because he had it all…talent, grace, professionalism and dedication.

“He was the consummate entertainer and his contributions and legacy will be felt upon the world forever.”

Damn, RIP to the legend. The Godfather James passed on the 25th and now Mike has joined that great big orchestra in the sky. We will always love the KING. Long Live the KING!

Update 3: Here are some pics of MJ shooting a video for his recent tour that was to start on July 13th. Source: TMZ 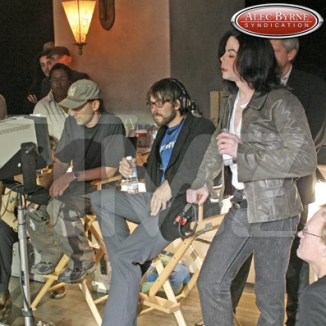 Here is a pic that ET has released of the final moments before we lost the King of Pop.

TMZ reports that Michael Jackson has been taken to UCLA Medical Center in Los Angeles hospital by ambulance for cardiac arrest. Sources are stating that a 911 call was received from Jackson’s Holby Hills residence was placed at 12:21 PM Thursday afternoon.

Jackson’s father, Joe, told E! News that he’s aware of the emergency but didn’t have any details.

“I am in Las Vegas, but yes, people in Los Angeles called me and are with Michael and tell me he was taken to the hospital,” Jackson said. “His mother is on her way to the hospital now to check in on him.”

“I am not sure what’s wrong. I am waiting to hear back from them,” he added.