Michael Keaton stars in the “how this country become obese” biopic aka the story of Ray Kroc who built McDonalds into a gazillion dollar corporation.

The Game stopped by Ferguson, MO yesterday to visit Michael Brown’s memorial and meet with his family. That wasn’t the extent of his stay, however.

The Compton native was also in a giving mood and took it upon himself to buy 100 Happy Meals, which he also helped cook and serve to the local youth as part of his Robin Hood Project. You can check out the rest of the pics and videos here. Salute to Game for stepping up and spreading some love.

Got a chance to spend time with #MikeBrown's grandmother. #Ferguson

#100HappyMeals for the kids in #Ferguson on me got em turnt up in hurrr !!!!! #TheRobinHoodProject

The drive thru back open & I'm servin… Pull up !!! #McDonalds #Ferguson #100HappyMeals

#100HappyMeals in #Ferguson for the kids in the neighborhood….. I appreciate yall for showing love & the workers at the Mickey D's….. This was a dope experience !!!! #Ferguson #RIPMIKEBROWN #HandsUp #DontShoot #WeMatter #TheRobinHoodProject

Got a chance to meet #MikeBrown Sr…. & chop it up a bit thanks to my homie @StarPower2011.. #Ferguson showed me love & I appreciate the moments we shared…… #WeAllMatter #DontShoot #RIPMIKEBROWN

I do it because they are the future. Some of the children from #Ferguson smiling after gettin their food. #100HappyMeals I loved every moment of this….. @therobinhoodproject

Nobody should have to wait an hour for Mickey D’s fries.

Probably every human being in this country has had some McDonalds fries at one time or another. Here they fight back against the critics who say that they don’t use real potatoes in probably the most addictive food in human history.

Does McDonald’s use real potatoes? Why do the fries always taste so good? Are they mashed and formed in a mold? There are a lot of questions about our fries so Grant Imahara is going to investigate our fry making process in his own way. Watch and discover how we make our World Famous Fries.

Pretty cut and dry but how many kids are gonna want the home cooked version?

There are a lot of wrongs on both sides here. First and foremost these women should not have jumped behind the counter at all to try to attack this guy over him checking to see if their $50 dollar bill was real. This probably caused to lose control defending himself and went overboard. He could of easily subdued these women and called for police. For him to use a lead pipe for two women was a bit extreme but what if they pulled a weapon on him? The truth of the matter is these women had no right to jump over the counter no matter the circumstance and brought this horrible situation on themselves.

Mickey D’s employee Rayon McIntosh, 31, used a metal bat to beat Darbeau and pal Rachel Edwards after they jumped behind the counter during a dispute over a $50 bill.

McIntosh is on parole after serving 10 years for manslaughter for shooting and killing a 17-year-old classmate in 2000.

Darbeau’s mother said her daughter was unarmed and didn’t deserve the beating, some of which occurred while she was helpless on the floor.

END_OF_DOCUMENT_TOKEN_TO_BE_REPLACED

Who would have ever thought working at McDonalds would become a coveted job?

Shows you that this tough economy has changed peoples attitude. Full disclosure: I worked at McDonalds for probably two weeks back in 1990.

via Sacbee
McDonald’s didn’t have a complete count on how many applicants showed up Tuesday, but so many arrived on some local McDonald’s doorsteps that restaurant owners were nearly overwhelmed.

END_OF_DOCUMENT_TOKEN_TO_BE_REPLACED

I guess working at McDonalds will not be frowned upon too much longer, the way things are going in this country. 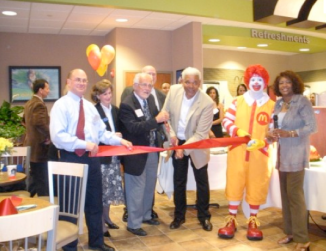 The company, based in Oak Brook, Ill., says it is making a concerted effort to add staff as its business improves and as more of its restaurants stay open 24 hours a day.

END_OF_DOCUMENT_TOKEN_TO_BE_REPLACED

And we feed this to our kids? Shame on us.

END_OF_DOCUMENT_TOKEN_TO_BE_REPLACED

This chick went absolutely berserk over some McNuggets. They should of went out there and kicked her ass.

A woman in Toledo, Ohio has been indicted for vandalism after going into a rage at a McDonald’s drive up window when employees refused to sell her McNuggets because it was breakfast time. (Aug. 9)

Saw this commercial during the game, so I just had to post it for all. The update from the classic ‘Jordan vs. Bird’ McDonalds commercial.

Is this even news? Anway  Howard’s baby mama Royce Reed drops it low at a Terell Owens party in Miami. Looks like she was just having some booty smacking fun, but by all previous accounts Dwight does not like her extracurricular activities, especially when he is cultivating an all American image.

Exclusive sneak-peek from the much-talked-about McDonalds commercial featuring Dwight Howard and LeBron James. For those who remember the 1993 version, this might look familiar. Tune in to CBS before the kickoff of Super Bowl XLIV to see the rest!

END_OF_DOCUMENT_TOKEN_TO_BE_REPLACED

Can you believe that one of the greatest athlete’s loves McDonalds probably the worst food on the planet.

Today, Ochocinco got to work behind the counter. He posted a photograph of his new job to Twitter, and professed his joy for becoming “a part of the GOLDEN ARCH.”

This chick needs to watch Super Size Me.

KANSAS CITY, Mo. — Police in Kansas City, Mo., are looking for a woman who went on a rampage at a McDonald’s because she didn’t like her hamburger.

Police say the woman caused thousands of dollars in damage on Dec. 27 when she became upset that the restaurant wouldn’t refund her money.

Check out my lil brother as he shoots his first commercial for McDonalds called the Dolla Van Demos.

Check the making of one of McDonald’s new 2010 breakfast commercials featuring WordSpit, Joya Bravo, and the creator of Dollar Van Demos, Joe.

Well regardless to how we feel, some people are gonna eat hamburgers and Burger King has decided that those customers need a more futuristic looking restaurant. Below are some pics which show off the new sexy design and where our next outbreak of E.Coli will come from: 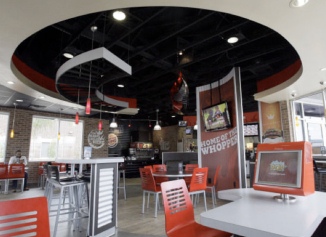 As part of a plan to be revealed Wednesday in Amsterdam, the company will announce a massive effort to overhaul its 12,000 locations worldwide. The sleek interior will include rotating red flame chandeliers, brilliant TV-screen menus and industrial-inspired corrugated metal and brick walls.

“I’d call it more contemporary, edgy, futuristic,” Chairman and CEO John Chidsey told The Associated Press. “It feels so much more like an upscale restaurant.”

These Negroes still do McDonald’s?

Pharrell Williams x McDonalds. Talk about some free publicity. Pharrell was so desperate for a McDonalds in a Paris airport to open early that he busts out in song and dance to convince the cashiers to open. Too bad he just ends up scaring them. McDonalds…time for you to ride the PR machine and give Skateboard P a lifetime supply of Big Macs.