Nick out here speaking the gospel.

In Nick Cannon’s recent interview with VladTV, Vlad brings up the fact that Nick Cannon has been a celebrity since he was very young. Nick immediately dispels the notion that he is out of touch or “in a bubble.” “I’m on the ground level,” he said, “I do so much that people don’t know about…to make sure these young people have opportunities.” From there, Nick describes his career arc, from growing up in a rough neighborhood, to breaking onto Nickelodeon, to making money and gratifying his ego, and now to giving back to his community. He also states that while a lot of celebrities claim gangs, it’s a source of insecurity and that he “never wants to glorify it.”

Straight up I would have preferred Michael B. Jordan in this role instead of Nick Cannon but I will check it out and see if he can pull it off.

Did Tyrese ever say it didn’t happen? I think Spanky got exactly what he wanted and that if Tyrese really wanted to hurt him he would of just ignored him and not even responded if the allegations are so ludicrous. Now people will see the response video and look up the original video that sparked this in the first place. Round to Spanky.

Remember when this came out awhile back and it is still relevant to this day.

Sorry so late posting this.

At the risk of augmenting album sales for a performer I don’t personally support, I call your attention to Eminem’s latest track attack on Mariah Carey and her husband Nick Cannon’s confrontational response.

This back and forth is a little more interesting than the standard diss and diss back, because Cannon calls out the racial dynamic of Eminem’s sexually derogatory attacks on Mariah Carey in a track called ‘Bagpipes From Baghdad’ from Eminem’s forthcoming album, ‘Relapse.’
Here’s just an excerpt of what Cannon had to say to Eminem, calling him “Slim Lamey,” via a Friday blog post, which seems to have been taken down:

Maybe I’m going too far, but I thought we moved beyond the days where white men could spew vulgar obscenities at our beautiful queens and get away with it. What’s next? END_OF_DOCUMENT_TOKEN_TO_BE_REPLACED

Tired of the ‘same ole’ remixes from Timbaland and Jermaine Dupri?

Well enter this great contest from Mariah Carey and a new online start up called Indaba Music that puts all you up and coming producers to the test. They have some great opportunities if you win and could possibly vault you in the atmosphere and expose you to working with the top female artist of all-time .

Starting July 15, the complete stems of “I’ll Be Lovin’ U Long Time,” from Carey’s Island release, will be made available to the members of Indaba Music, an online community for aspiring and established producers and artists.

“This contest is a way for her to continue being a pioneer in the remix world, potentially finding a new sound, a new power, a new energy in the online space, as opposed to just the go-to producers of the moment.”

The contest involves elements of fan voting, user-generated content and social networking. Entrants must join Indaba by creating a profile and can then download the song stems, work on their mix and submit it via the site by August 26. The Indaba community will pick its 10 favorite mixes via online voting.

Three judges — including Sudack, who co-executive-produced “E=MC2” — will then select the winner. The producer of the winning mix will receive $5,000, be designated as Carey’s No. 1 MySpace friend for four weeks and possibly have his or her work released.

(oh yeah fellas, most likely you will not be getting any alone time with Mariah, Nick will be watching)

How could we go one week without a pic of Mariah. Here she is throwing the first pitch at a Tokyo baseball game and looking like the blushing bride. Nick Cannon haters eat your heart out. 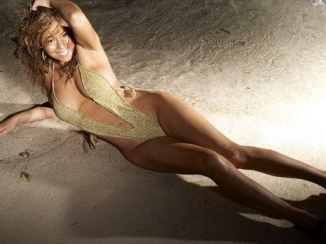 Newly married Mariah Carey shows off effects the of her recent master cleanse diet, with these hot pics of her on some beach.
From the new issue of VIBE, go pick it up!!
(Nick don’t mess this up..)