Damn good ole Ben was about his people at one time,wonder what happened to turn him into the guy who spouts racist and homophobic rhetoric to gain traction with white people. 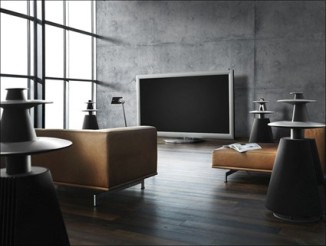 Plasma’s dying, huh? Go and tell that to Bang & Olufsen. Just in case the 50- and 65-inch versions of the BeoVision 4 HDTV weren’t expansive enough, the high-end home cinema outfitter has just pushed out news of an all new addition: the 103-inch BeoVision 4-103. If that number immediately rings a bell, here’s a cookie. The 103-inch Panasonic TH-103PF9 panel is indeed the exact one used here, but B&O has obviously spruced up the design, added an automatic rising stand and incorporated the BeoSystem 3 and the VisionClear technology that automatically adjusts colors and brightness. Oh, and it tossed in a B&O logo, which is darn near priceless. Speaking of stickers, the set should be available this July for around €100,000 ($136,220) pre-VAT. Check the demonstration vid after the break and the gallery over at Engadget.

Shoppers eager to grab their share of discounted plasma TVs and Blu-ray DVDs lined up in droves today as Circuit City stores began liquidating their inventory. The bankrupt electronics retailer is shutting down its 567 U.S. stores and laying off 34,000 workers. 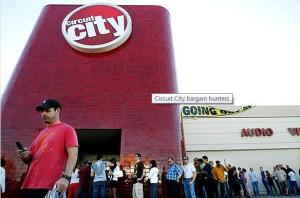 By late morning, the line outside the Circuit City in Hollywood was almost 100 people long. Carlos Reyes, 24, and girlfriend Diana Anzora, 22, of Los Angeles, lined up to buy video games and DVDs.

“I prefer Best Buy, and if it wasn’t for the liquidation I probably wouldn’t have come, especially this early on a Saturday,” Reyes said. “We didn’t know it was going to be such a big line.”

Reyes said they would probably stick to smaller items since all sales are final.

“We don’t want to get anything too big,” he said. “You don’t want to not be able to return an HD or plasma.” END_OF_DOCUMENT_TOKEN_TO_BE_REPLACED