Lisa Evers breaks news of one of Hip Hop music’s biggest unsolved murders. More details will develop during the day.

Prodigy from Mobb Deep visits the Munchies Test Kitchen to enlighten us on how to cook BBQ salmon if you were in prison. Now you might say, “But I am not in prison, why would I make this?” The answer to that is simple, because it is delicious and affordable. This is a great recipe for any with access only a microwave and a toaster oven, like a college student living in the dorms, or someone in prison.

Damn. This is so fire.

Yup. Dedicated to all who have been victims of white supremacy and police brutality.

Sararee pens a  like a heartfelt letter to his ex, global superstar Nicki Minaj.

Jay Z gives his thoughts on the murder of Chinx Drugz in his second Tidal B-Sides show. 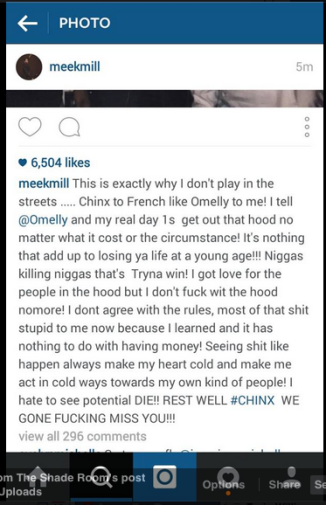 This question was posed in the comments on Shade Room. Is Meek Mill a hypocrite for his dissociation with the same hood that he still raps about and made him famous and rich? The death of Chinx Drugz is another tragic death in the world of rap music that never seems to end. #BlacklivesMatter

They need to drop the whole tape already but he has been hitting on all cylinders with these.

Yeah I am going there today.

Angela Simmons shows off some of her boxing skills posted to her instagram account. Hit the jump to see her in action..

END_OF_DOCUMENT_TOKEN_TO_BE_REPLACED

Real talk from some vets in the game.

We talked to LL, Rick Rubin, Russell Simmons and everyone involved in making this historic rap record.

This is definitely not for the squeamish. Saw this posted on FB yesterday and was taken aback at the severity of this beat down.

An off-duty NYPD sergeant was beaten within an inch of his life outside a Queens diner early Sunday by a thug who kept brutally bashing his head as he lay sprawled in the street.

A sickening cell-phone video shows Sgt. Mohammed Deen get knocked to the ground, then repeatedly kicked and punched by a hulking brute identified by cops as Hayden Holder, 29, of Jamaica.

At one point, the video shows the attacker leaving Deen crumpled on the pavement as he tries to smash in the windows of the NYPD veteran’s nearby white BMW 535i — with Deen’s horrified wife locked inside, a police source said.
Modal Trigger

When the perp can’t break the glass, the video — which was posted to Facebook — shows him returning to his motionless victim, smashing his head against the street and pummeling him some more.

“It was a vicious, savage beating,” one stunned law-enforcement source said.

END_OF_DOCUMENT_TOKEN_TO_BE_REPLACED

Salute this man for thinking about the less fortunate and doing a benefit gig and coat drive. Shouts to Chris Krook, Krookonline, and Legal Hustle TV. 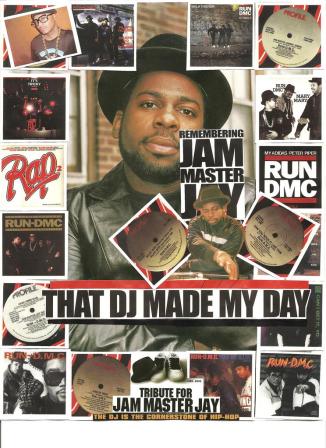 The corner of 205th Street and Hollis in Queens will be renamed “Run-D.M.C. JMJ Way” after Hip-Hop group Run DMC and the group’s legendary DJ, Jam Master Jay who was murdered in a Queens recording studio on October 30, 2002. All three members of the group hail from the Hollis neighborhood. Queens Democrat Councilman Leroy G. Comrie, representative of the area, supported the naming of the street, and even highlighted Darryl McDaniel’s (DMC) donation of memorabilia for the possible Hollis Hip-Hop Museum.

In a statement to the New York Times Comrie said, “It is my sincere hope that this street renaming, combined with the museum, will help to economically revitalize this particular neighborhood as a potential tourism attraction.” On April 4, 2009, Run DMC became just the second Hip-Hop group to be inducted into the Rock N Roll Hall of Fame, after Grandmaster Flash and The Furious Five. 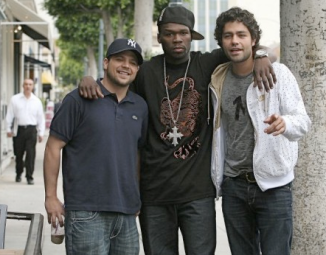 HBO’s Entourage will be a little bit crowded when the new season kicks off in July. Rapper 50 Cent will reportedly join the cast of the series that revolves around Vincent Chase, a young A-list movie star, and his childhood friends from Bayside, Queens, New York City, as they navigate the unfamiliar terrain of Hollywood, California. According to The Insider, the infamous singer has been spotted filming scenes for the show on Friday, joining cast members Jerry Ferrara, Adrian Grenier and series creator Doug Ellin on the set.

This is not the first time a rapper has graced the show. Entourage has easily carved a niche in the rap community by booking rappers like Kanye West, T.I. and Snoop Dogg. Moreover, both Saigon and Bow Wow have also recurrently appeared on the show.

“50 looked like he was enjoying his time as he drove on the streets of Los Angeles in a white convertible Rolls Royce,” The Insider reported, adding that the rapper’s episode is set to air in August.

As of this moment, however, 50 Cent’s participation on Entourage is not yet known.

This is the latest casting news for Entourage‘s sixth season. Gary Cole has been confirmed to be joining the cast as a regular for the new season while Lil’ Wayne is expected to appear in an episode as himself. Also guest starring are Tom Brady, Autumn Reeser, and Swarnendra Verma. END_OF_DOCUMENT_TOKEN_TO_BE_REPLACED

On a nondescript street corner in Hollis, Queens, a small — and quite affordable — burger joint opened recently.

The place, Hollis Famous Burgers, offers mini-burgers for $1; for that price diners get a complimentary viewing of the Hollis Hip Hop Museum. The word “museum” might be a bit of an overstatement, given the space, but the collection and what it celebrates are not, at least not to the people behind it.

There are more than 100 items on the walls testifying to the neighborhood as a fertile ground for hip-hop artists. Along with a helping of chicken wings, washed down with a cup of “Hollis Famous” lemonade, customers can examine the hit CDs of local rap legends, like Ja Rule, LL Cool J, and Irv Gotti, the founder of Murder Inc., the hip-hop record company that launched several careers.

“Hollis is our Motown, our Nashville, our Beale Street,” said Orville Hall, 42, the owner of the restaurant, and a childhood friend of the members of Run-DMC, which happens to be the best-represented rap group in the burger joint — rather, museum.

At the grand opening on Thursday afternoon, Mr. Hall explained that there was something about Hollis “back in the day” that seemed to nurture hip-hop artists. There was a keen desire for live D.J.’s and M.C.’s at local parties.

It was a working-class black neighborhood that was tough but not bleak. The rap lyrics from neighborhood artists had swagger but were clean enough to be offered to the mainstream.

Mr. Hall decided that Hollis, and perhaps his own business interests, would be best served by pairing a burger restaurant with the museum. On Thursday his venture got the blessing of DMC, whose real name is Darryl McDaniels and who recited a few of his famous lyrics.

Standing near his gold and platinum records, Mr. McDaniels said he wanted people in the neighborhood to use them as proof of the power of persistence to succeed, whatever the odds.

“Because we did something good, people in hoods all over the world were able to look at us and say, ‘Yo, I know what I can do, and I know what I can be.’ If you don’t believe it, then history is on the wall, homie.”

Mr. McDaniels donated one of his gold records (“Run-DMC”) and a platinum one (“Raising Hell”). END_OF_DOCUMENT_TOKEN_TO_BE_REPLACED

Okay, its obvious that somebody has spring a leak. Not that I’m complaining but I don’t wanna hear this album via a bunch of posts. Lemme still look forward to something when I rip the plastic off, ya dig!