Plies brother with the commentary. I keep thinking he was gonna say it was ‘going down at the Ritz Carlton’. Holman is a well known prison that has been featured for years on MSNBC’s “Locked Up”. No details on the fallout since these skirmishes.

– Allegedly responding to their mistreatment, prisoners in at the Holman Correctional Facility in Atmore, about 50 miles north of Mobile, began to riot early Saturday morning. Early reports indicate that a correctional officer was stabbed 9 times and the warden, at least once Friday night which led to the riots. Their injuries were not life-threatening.

Props to these gentlemen for continuing the discussion of problems in Baltimore and across the urban landscape in America.

After being slammed last year for his comments or lack thereof  about Mike Brown, Young Thug has changed his tune and spoke out vehemently on the situation in Baltimore.

Joseph Kent’s newly appointed attorney Steve Beatty spoke with CNN’s Don Lemon last night to set the record straight on what Kent’s motives were for breaking the citywide curfew. He also relays a message from Kent asking that people not commit any violence in his name. For now, Kent remains in jail on a curfew violation charge.

1 group can burn & loot when a team scores less points than another but when paid public servants kill citizens, we gotta be BaggerVance?

Jessie Williams speaks to the media driven narrative about the protesters and rioting that is happening in Baltimore.

END_OF_DOCUMENT_TOKEN_TO_BE_REPLACED

Cole jump starts a slavery uprising in his new video for G.O.M.D.

The hit is right around :20 into the video and put the video at full screen to really get a good view.

The description title says she was innocent. Regardless, in situations such as this (riot after a loss in a highly contested college basketball game) police officers could care less about gender and frankly anyone can get it, whether you are guilty or not.

“These girls had been trying to get to their car. The girl is on her phone not paying attention and this cop came out of nowhere and just leveled her,” Landolt told the Daily Star. “After that everyone just started yelling and she started crying.” -Phoebe Landolt.

Consumerism at its worst or best depending on what side of the equation you are on. These is why the 1% does not give a fuck about the 99% at the end of the day.

Really Penn State? I guess these idiots think that covering up and or not reporting to police sodomy of young children is not that serious of an offense.

Penn State students riot after the announcement of the departure of Joe Pa, the latest news in the Sandusky Scandal.

I thought Ray Lewis said that violence would happen if there was no football this season? Seems like it happening more and more these days with the outcomes becoming deadly. Here is a video of some fisticuffs that went down at Candlestick Park this weekend, along with info about a separate shooting incident:

The shooting in the parking lot at Candlestick Park evoked memories of another recent disturbing act of postgame violence involving two rival California pro sports teams – the near-fatal beating in March of a San Francisco Giants fan outside Dodger Stadium.

END_OF_DOCUMENT_TOKEN_TO_BE_REPLACED

After seeing these pictures have surface expect the hammer to come down immediately. Hit the jump for more pics and info:

END_OF_DOCUMENT_TOKEN_TO_BE_REPLACED

So to dumb Eastwest Goon who made the even dumber comments below, here is a pic of a fan getting a Tyler the Creator tat, to prove that these guys like I said are ‘a phenomenon’. 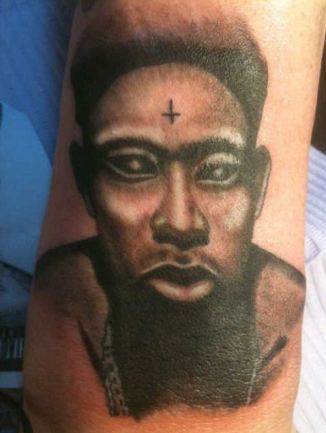 These guys are officially a phenomenon.

At least we can say they are passionate about their politics.

Argentine lawmakers pushed, punched and threw chairs at each other during a raucous session to choose the president of a northern province’s lower house.

Scores of police officers wearing helmets and carrying batons and pepper spray entered a New School building at 65 Fifth Avenue around 11 a.m. on Friday, arresting 19 protesters who had occupied it as part of a determined protest aimed at the university’s president, Bob Kerrey. “The Police Department was asked to arrest individuals trespassing on the property,” said Paul J. Browne, the department’s chief spokesman, who said the operation “was done in a very organized, orderly fashion.”

But students at the scene described a tumultuous situation in which protesters were pepper-sprayed before being placed in handcuffs and loaded by police officers into the back of a white van, around 11:30 a.m.

Mr. Browne said it was “untrue that pepper spray or mace was used in effectuating the arrests.” END_OF_DOCUMENT_TOKEN_TO_BE_REPLACED

One of the hostages was released late Friday. Both prison employees are recreation specialists at the Reeves County Detention Center.

Barton said the riot started after noon, when the body of an inmate who died of natural causes was removed from the prison.

More than a thousand prisoners were milling about in the yard and smoke from a fire set during the disturbance still flowed from the recreation building, the newspaper reported. 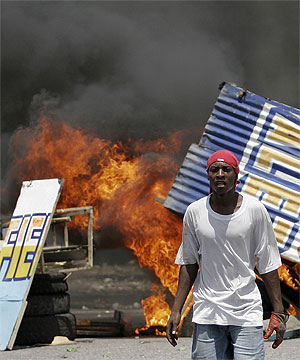 After weeks of unrest in Haiti due to food shortages, the Prime Minister has been ousted by a majority Senate vote. Rioters have been clamoring at the gates in Port-au-Prince, looting stores, burning cars and assaulting motorists to protest the rising costs of rice, beans, cooking oil and other amenities.
END_OF_DOCUMENT_TOKEN_TO_BE_REPLACED 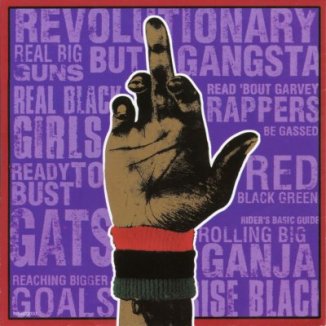 Honestly earlier in the week I overlooked this link because I just thought it was re hatched footage of the riot (fracas) that dead prez sparked over in Africa, but when I finally slowed down and read the thread I realized this was something entirely different. In honor of Sean Bell and the countless others who will never have live footage as their testament to the unlawful practices of “law” enforcement we post this YouTube click of police attacking a crowd of protesters in Washington State after a dead prez concert.