Crakk still nice. Hov needs to pick this guy up.

Dame Dash along with Hip Hop Motivation drop the first chapter to his audiobook “Culture Vultures”.

Steel Panther joins the parade of people (including his buddy John Legend) who have slammed Kanye West for his theatrics during The Grammys and his comments after the show.

Dame has been hitting on all cylinders with these interviews and I am gonna post every single one of them.

Dame Dash explains why he called music industry exec Lyor Cohen a “culture vulture” on Instagram, telling VladTV that he believes Lyor should move on from Hip-Hop and “stop raping our culture.” He then questions what Lyor and Joie Manda have contributed to Hip-Hop culture while holding higher positions at esteemed music labels.

Speaking about his own interaction with Cohen, Dame says that he’s never had a problem with Jay Z, and says Lyor “ruined” Roc-A-Fella Records. He also shares his thoughts on Lyor’s new label 300, saying that he’s probably “robbing whoever he’s in business with.” When Young Thug, who’s signed to 300, is brought up, Dame says the label might not be taking the Atlanta rapper on a ride, because he’s managed by Birdman.

At the end of the interview, Dame says that he believes label execs like Lyor and Joie should be questioned about their roles. He also adds that he can’t be blackballed by the execs, as they don’t cut his checks.

The shot heard around the world this morning. From former friends to now foes, Beanie Sigel releases scathing Jay Z diss track “What You Talking About” speaking about their very strained relationship. Very important indeed, even the Wall Street Journal had to blog about it!(c) Joe LaPluma 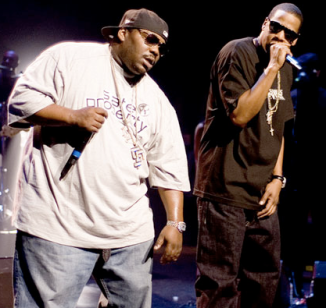 The newly humbled Kanye West has a new single out by way of the folks at South Park. “Gay Fish” is certainly poised to be the most talked about KW single of the year.

Ha! Found this in my youtube inbox and just had to post this baby right here. Do the “Dame Dash” and “Jigga Pro”. You gotta love the white kid killing it at about 1:43. If this little ditty blows up just remember where you saw it first.

OK, time for some marketing suggestions.  Instead of putting out “Death of a Dynasty” or another Jim Jones album for that matter, Dame Dash should’ve regrouped and packaged the story that the whole world was interested in hearing and that is the demise and fall of one of the strongest camps in Hip Hop, Roc-a-Fella Records.  This doc looks compelling, I would pay some snaps to go see this.  All the elements are there; betrayal, jealousy and unprecedented arrogance (gotta love it!).  Jim Jones almost writes his own obituary by illustrating that he has become the Dame Dash to Cam’Ron’s Jay-Z, meaning that the magic, the chemistry that was Dip Set will never be the same once these dudes are seperated just like the Roc will never be the Roc without Jay & Dame as one unit (sorry ‘Ye).

“Jay’s the kindest nigga that walk the face of this earth and everything ain’t money,” said Bleek in a video on HipHopBeef.com, rebutting rumors that Jay-Z didn’t look after his artists. “Nigga gave everybody he knew that he came up with rhyming with opportunity, that’s all you can ask for…You know Hov broke bread…I left Def Jam…I had options to put out another album on Def Jam but then I had a meeting with him and he made it real clear to me, ‘Why do that, you got the opportunity right now to run your own company. I’ma get you the distribution deal for Get Low Records, you sign your artists, drop your albums under Get Low and I’ma still executive produce.'”

As for his relationship with Dame Dash, “It was weird. Dame always was cool to me. He looked out for me as a youngin…He was a good dude. You know how they say – with money, it changes a lot of things. It changed Roc-A-Fella.”

Former Roc-A-Fella artist Uncle Murda has announced a new rap alias along with the launch of a new murder-based website that will shine a light on real murders around the world.

“When it’s time to get that money, it’s definitely, Uncle M,” Murda said in an interview. “We not gonna let nothing stop the money. You see, the ‘m’ is for the money, Murda, menage a trois, marijuana, whatever you want. You know, the ‘m’ covers everything.” (True Stories Radio)

“Right now, I’m on my computer sh*t, this is firstdegreemurda.com,” Murda said via his web page. “The reason why I set this sh*t up is so you can see all the murders taking place across the world, not just New York — you can also see a lot of the sh*t that the police be doing, like they be doing a lot of bullsh*t, if you go check up on my site, you got ex-police, ex-officers raping girls, beating up people in wheel chairs, all types of sh*t.” (First Degree Murda)

“There’s just so much bullsh*t with the labels. I’m no longer with Def Jam. I’m a free agent and I’m still hot,” Murda said in an interview. “Things ain’t work out over there. Once Jay-Z left, you know, they ain’t really know what to do with Uncle Murda.” (Vlad TV)

Jay-Z will play a special concert in Washington, D.C., on January 19, the night before President-elect Barack Obama’s inauguration, it was announced Tuesday (January 6).

Billed “In Concert on the Eve of Change,” the “intimate performance” will take place at the 1,847-capacity Warner Theater and will feature Jay performing with his full band.

Tickets for the performance go on sale Friday at 10 a.m.

The rap icon has long been an Obama supporter. Jay, along with music executive Kevin Liles, Mary J. Blige and Diddy penned, an open letter one month before the November election calling for the hip-hop community to vote in support of Obama and Vice President-elect Joe Biden. END_OF_DOCUMENT_TOKEN_TO_BE_REPLACED

Damn, who would’ve ever thought that the Death of a Dynasty would leave such a looming vacuum in Hip Hop? The ROC was on their A-Game in ’01 before Nas came through and crushed their building, but those days are behind us and we need a crew of this caliber back in the booth, for the sake of the craft. Not to take a shot at Nahright, but I pulled this clip and right above it was this doo-doo freestyle from Asher Roth and Kid Cudi, two of the supposed Freshman of ’09…according to XXL. If this is what the game got to offer in the New Year, then Hip Hop is headed back to the cemetery.

Jay-Z has filmed a new video for Barack Obama and it’s been uploaded to YouTube. In it, the Obama-support walks potential voters through what they’ll need for identification at the polls. “Even if you don’t have I.D. you can still vote,” the newlywed tells viewers. Sadly Beyonce isn’t in it with him. 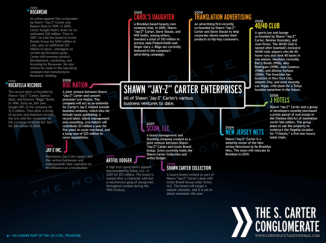 This is an excellent summation of Shawn Carter’s transition from trapper to rapper to mogul via the team over at Corporate Takeover.

Looking towards the future, Carter’s current portfolio of business interests—which include the New Jersey Nets, 40/40 Club, beauty care line Carol’s Daughter, J hotels, Scion, LLC., and Translation Advertising—all seem to transcend the youth-driven hip-hop market. And that is to say, it’s unlikely the services provided by a firm like Translation Advertising are intended for fickle young hip-hop fans. By cashing in on the Jay-Z inc. franchise, Carter looks to make the transition from hip-hop star to a business celebrity, much like Rupert Murdoch, Donald Trump, Warren Buffet, and Magic Johnson

Live Nation Inc. confirmed on Thursday (5/1) that it has finalized its deal with Jay-Z for an unprecedented 10-year agreement that includes live shows, new music and front money for new ventures. Jay scores another accolade for snagging the largest music deal in history, second only to Madonna who also is in bed with Live Nation for a long spell. The reported price tag of $150 million wasn’t verified nor was it disputed by the company. What they did release was the news that Jay was given the option to by half a million stocks of Live Nation at $13.73 each, which would’ve already been a come-up, being that the stock closed at $14.40 yesterday, up 4.4 percent. Jay can be heard referring to the venture as “Roc-Nation” on the remix to “Blow The Whistle” released earlier this week.

Editor’s Note: That dude is serious about keeping those “4’s” in rotation. Its almost magical how he attracts that number. I wonder who is overseeing Roc-a-Fella, what label Kanye is on and what label Beans and Bleek is on?
Is he still the CEO of the ROC? Is the ROC actually ROC Nation? I mean can somebody get an interview with the Big Homie!

The lyrical one Papoose strikes back at Roc-a-Fella artist Uncle Murda, disputing his allegation that he possibly got shot by NYPD.  Damn, is this where the game is headed?

The Broad Street Bully Beanie Sigel was promptly imprisoned for one day following his second probation violation. Sigel well also have to sweat it out in a halfway house for six months as well as see his probation get extended by 18 months.  Bean’s can be heard on Whoo Kid’s radio show the other day boasting that he was laying low in anticipation of his probation finishing up in weeks.  The judge is citing an unauthorized trip to Atlantic City and association with a felon as grounds upon which he is violating the Philly rapper.  The 33 year old Roc-a-Fella artist could’ve recieved up to three to nine months in prison for the violation.  The judge acknowledged Beans recent community work that was done alongside Bill Cosby recently, but added “If they’re looking at you as a role model, you’ve got to do the right thing,” according to U.S. District Judge R. Barclay Surrick.  For more on these breaking developments CLICK HERE

Editor’s Note: All of this comes on the heels of Beans putting up lackluster numbers for his latest effort, The Solution that Beans claims was under promoted. His stint in a halfway house effectively minimizes any chance Beans had of promoting his album and blowing life back into the project.

Roc-a-Fella recording artist Beanie Sigel made a STOP THE VIOLENCE PSA which is currently airing in his hometown of Philly.  The Broad Street Bully speaks in depth about his intentions on curbing the rampant crimewave that has registered 300 plus murders this year in the City of Brotherly Love.  For the critics who claim Beans is the inspiration for the teen’s violent ways, he offers this PSA as a solution.  He also speaks on his recent Roc-a-Fella/Def Jam release, The Solution.  Coincidence, you decide…click HERE to see the interview with Mac Mittens.  Shout out to the homie Nahright