Respectability politics on steroids. With that being said his criticism of BLM may be valid but to absolve this white supremacist system we live under in all the black communities problems is laughable at best.

Author says the solution is up to the churches to encourage reconciliation, revival and reformation

There are so many variables here in this story. How this ends up will shed a light on tyranny, white supremacy, and how our rulers in this country handle these angry white men who have taken up arms and are ready to die for what they believe in. Black Lives Matter who have similar themes in their messages when in comes to our government are labelled as troublemakers, terrorists, and non patriotic. So far these guys have been treated with kid gloves and may have some strong points about our government but we can see a stark difference in how they are treated in the media.

A group of armed men have taken over a building in the Malheur Natural Wildlife Refuge in Oregon. They are calling on “patriots” to join them.

We just have to ignore these clowns at Fox News. Check out some footage from the White House Poetry event put together by First Lady Michelle Obama.

This is a little video I put together of my experience at The White House Poetry event. Thanks to @smurf4lyfe @missjillscott @imdjdummy @oneblackman Dudley’s, Rhea, Nicole, Cristen, Shawn Gee,

Typical lame backtrack that is all too-common today. Tucker Carlson is an a-hole always has, and always be.

“This is what happens when you get too emotional,” Carlson said. “I’m a dog lover, I love them and…I know a lot about what Michael Vick did…I overspoke. I’m uncomfortable with the death penalty in any circumstance. Of course I don’t think he should be executed, but I do think that what he did is truly appalling.”
Full Story Here..

Well he said this while filling for another a-hole Sean Hannity so what do we expect? But this right here is quite disturbing knowing the history of this country executing innocent Black men from slavery up until this day. This guys has always been a dumb pundit, but his clear racist ideals are starting to protrude out of his oversized ego. Michael Vick paid his debt to society and has been on very good behavior since, so get off his back people.

Definitely had to post this video and the video with T-Pain and Sean Hannity is probably the lowest moment in the video in terms of rappers they discuss. Point well taken fellas.

Paradise Gray directs this scathing critique of the current climate of rap music featuring Jasiri X, Isada Tariq and Living Proofe and produced by Idasa Tariq. I edited the video myself so whoever got a problem with it let me know…but you know it’s true

Fox News definitely was the go to network for lies,deception and racism this year and some of you guys are obviously watching their flagship shows.Will we accept this sort of faux journalism in 2010?

2009 was a record year for the Fox News Channel.

The News Corp-owned cable news outlet has just finished its best year among total viewers in its 13-plus year history.

Now he can say it was an honest mistake but his history tells me otherwise.

These two hypocrites try and wash over the fact this broad was standing on her morale high horse and come to find out she did a sex tape getting her self off.

This is a very interesting article on the real or perceived power Glenn Beck,Rush Limbaugh, and Sean Hannity who seem to revel in the constant media glare but could not deliver another Republican in the White house this time around.

Here David Brooks explains his notion that these guys represent an illusory army that doesn’t materialize at the voting booth.

Let us take a trip back into history. Not ancient history. Recent history. It is the winter of 2007. The presidential primaries are approaching. The talk jocks like Rush Limbaugh, Glenn Beck, Sean Hannity and the rest are over the moon about Fred Thompson. They’re weak at the knees at the thought of Mitt Romney. Meanwhile, they are hurling torrents of abuse at the unreliable deviationists: John McCain and Mike Huckabee.

Yet somehow, despite the fervor of the great microphone giants, the Thompson campaign flops like a fish. Despite the schoolgirl delight from the radio studios, the Romney campaign underperforms.

Along comes New Hampshire and McCain wins! Republican voters have not heeded their masters in the media. Before long, South Carolina looms as the crucial point of the race. The contest is effectively between Romney and McCain. The talk jocks are now in spittle-flecked furor. Day after day, whole programs are dedicated to hurling abuse at McCain and everybody ever associated with him. The jocks are threatening to unleash their angry millions.

Come on people did we really not know this joker is green with envy that we have President Obama in office. But his idiocy has relegated any potentil political office to some backwater towns that loves his hate spewing rhetoric on FOX News.

I love watching Jon Stewart shred right-wingers and their sour grape-fueled conspiracy theories, especially when it involves the idiocy espoused by FOX blowhards Glenn Beck and Sean Hannity. It is astounding though to see the these shock jocks do a complete 180 from when Bush was in power, back when they labeled you unpatriotic simply for criticizing the President.

Stewart: Yes, tyranny. A.K.A. our democratically elected President. You know what guys….I think you might be confusing tyranny with losing. And I feel for you because ah…I’ve been there. A few times. In fact one of them was a bit of a nail biter. But see, when the guy that you disagree with gets elected, he’s probably going to do things you disagree with. He could cut taxes on the wealthy. Remove government’s oversight capability. Invade a country that you thought should not be invaded but that’s not tyranny. That’s democracy. See now you’re in the minority. It’s supposed to taste like a s#%t taco. And by the way, if I remember correctly when a disagreement was expressed about that President’s actions when ya’ll were in power I believe the response was “Why do you hate America?”. “Watch what you say.” “Love it or leave it.” “Suck on my truck nuts.” ….. For god’s sake guys. You’ve been out of power for ten f*%#ng weeks. You’ve got a mid-term election in twenty months. Pace your rage!

Is it too far out there to think the Republican mouth pieces on FOX are looking for all-out anarchy during this administration when that should of been the call of day during Bush’s reign. CNN most socially connected anchor Rick Sanchez addressed the topic recently:

more about “Baracknophobia: Hannity, Bachmann, An…“, posted with vodpod

Finally someone steps up and checks that fat racist Rush Limbaugh who flames the fire of racism in all his rants and gets a check for $400 million dollars as reward. He does nothing but stoke racial tension and probably  prays something awful would happen to President-elect Obama. I say we take him and bbq his fat ass and feed him to the rednecks & racists who follow his every word.

(CNN) — The Republican party must stop “shouting at the world” and start listening to minority groups if it is to win elections in the 21st century, former Secretary of State Colin Powell said Thursday.

In an interview with CNN’s Fareed Zakaria for Sunday’s “GPS” program, President Bush’s former secretary of state said his party’s attempt “to use polarization for political advantage” backfired last month.

“I think the party has to take a hard look at itself,” Powell said in the interview, which was taped Wednesday. “There is nothing wrong with being conservative. There is nothing wrong with having socially conservative views — I don’t object to that. But if the party wants to have a future in this country, it has to face some realities. In another 20 years, the majority in this country will be the minority.”

Powell, who crossed party lines and endorsed President-elect Barack Obama just weeks before the election, said the GOP must see what is in the “hearts and minds” of African-American, Hispanic and Asian voters “and not just try to influence them by… the principles and dogma.”

“I think the party has to stop shouting at the world and at the country,”Powell said. “I think that the party has to take a hard look at itself, and I’ve talked to a number of leaders in recent weeks and they understand that.” Powell, who says he still considers himself a Republican, said his party should also stop listening to conservative radio talk show host Rush Limbaugh.

“Can we continue to listen to Rush Limbaugh?” Powell asked. “Is this really the kind of party that we want to be when these kinds of spokespersons seem to appeal to our lesser instincts rather than our better

I just got this video from the good people over at Brave New Films and they encouraged me to pass it on and I am doing just that. Very great video because it shows you the vicious way that Fox News has been attacking Sen. Obama and at what lengths they will go to smear his name.

Did you see Barack Obama go on The O’Reilly Factor last night—right into the belly of the beast? While we didn’t want Obama to appear on FOX initially, he wisely chose the same night John McCain delivered his RNC speech (the same night FOX received some of its highest ratings) to make an appearance. Talk about stealing the GOP’s thunder!

Obama was no doubt trying to appeal to conservative voters, since 88% of FOX viewers voted Republican in 2004. But FOX won’t let their conservative base go without a fight. That’s why O’Reilly needled and interrupted Obama, trying to get him to simplify many of his answers—a far cry from the softballs O’Reilly lobbed at many prominent Republicans like Rudy Giuliani in the past. And that’s why FOX has been attacking Obama with the same relentless smear tactics that they used against John Kerry four years ago. Watch them use the exact same attacks.

Give me a bit and I will post video of his appearance on the O’ Reilly factor.

He is lucky worst sh*t did not happen to him.

Boy this has been some week for Fox News. As reported here earlier this week dip sh*t radio and television host Sean Hannity was given a brand new radio syndication worth upwards of $100 million. Moveon.org and rap artist Nas stood together and protested the constant smear campaign by Fox News of presidential hopeful Sen. Barack Obama.

Now we have more leakage from former press secretary Scott McClellan that the Bush White House controlled the talking points of Fox News hosts such as the aforementioned Sean Hannity and Bill O’ Reilly amongst others. In addition Scott says that Fox News was basically their propaganda machine they used to spread their lies and agenda. Are we surprised? 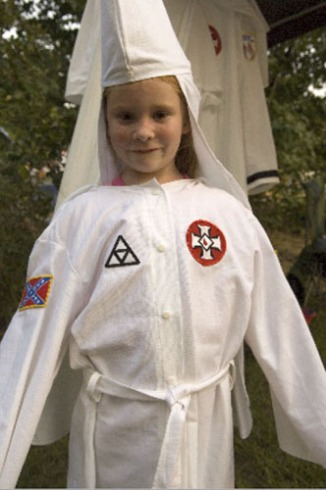 Aww isn’t this so cute, a perfectly healthy child born into the annals of racism via the KKK. For all you people who are asleep and condemn Rev. Wright about him speaking on this organization that murdered Black Americans and others who opposed their cannabilistic racism. Sean Hannity would be proud!!