Pretty fly for a white guy.

The jury has spoken and has been convicted of involuntary manslaughter. He was remanded until Nov. 23rd when he is sentenced. Accordin g to Harvey Levin of TMZ Murray will only serve half of whatever time he is given. Story Developing… 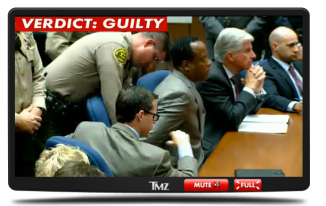 LOS ANGELES (AP) – “Captain EO” is moonwalking back to Disneyland.

The theme park announced plans Friday to bring back the 3-D sci-fi film starring Michael Jackson next February, over 23 years after the attraction debuted in Anaheim, Calif. The 17-minute film starred the late King of Pop as a singing-and-dancing intergalactic commander. It was directed by Francis Ford Coppola and executive produced by George Lucas.

In the film, Jackson leads a goofy alien and robot crew as they battle a wicked queen played by Anjelica Huston. “Captain EO” originally opened in Disneyland’s Tommorrowland in 1986 and ran for more than a decade. Identical versions later opened at other Disney theme parks. They were all closed by 1998.

Michael Jackson – We Are Here To Change The World

Really don’t know what to say about this. Michael surely had some very weird taste in art.

In a 1999 painting he commissioned, Michael Jackson strikes the same pose as Michelangelo’s statue of David with rippling abs, bulging pecs and smooth, marble-white skin — surrounded by a bevy of male cherubs.

END_OF_DOCUMENT_TOKEN_TO_BE_REPLACED

Okay we need to have a family meeting right now. How in the heck did Jermaine & Michael miss this one? 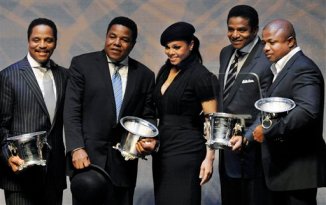 They are always talking about how united and loving their family us but these two don’t show. I now understand why their reality show pilot tanked, because getting them all together in the same room is nearly impossible!

The Jacksons were crowned icons at the BMI Urban Awards, but the King of Pop was absentee.Janet Jackson presented her music-making brothers—Michael, Tito, Jackie, Marlon, Jermaine and Randy—with the lifetime achievement BMI Icon award following a musical tribute at the award show celebrating R&B; and hip-hop’s top hitmakers. While Tito, Jackie, Marlon and Randy reunited Thursday to accept the award, Jermaine and Michael didn’t attend the Wilshire Theatre ceremony.

Where was the Moonwalker?

“I don’t know,” Marlon told The Associated Press before the show. “I think he’s in Egypt riding a camel or something.”