Rapper Kam exclusively spoke to DJ Vlad about his thoughts on Donald Trump, the Paris terrorist attacks and all religions being hijacked by white supremacy. While giving his thoughts on recent events in the media, the West Coast conscious rapper talked about Churches and Mosques pimping out blacks. “It’s all bad. All religions have been hijacked by white supremacy,” he said. When asked if the churches painted a negative effect on the black community, he answered, “Definitely! I don’t know if they created it because Christianity was imposed on black people in the black church. So I can’t say they created it. They perpetuated it, they continued it.”

Hello, After more than 20 years, I’ve finally decided to tell the world what I witnessed in 1991, which I believe was one of the biggest turning point in popular music, and ultimately American society. I have struggled for a long time weighing the pros and cons of making this story public as I was reluctant to implicate the individuals who were present that day. So I’ve simply decided to leave out names and all the details that may risk my personal well being and that of those who were, like me, dragged into something they weren’t ready for.

Between the late 80’s and early 90’s, I was what you may call a “decision maker” with one of the more established company in the music industry. I came from Europe in the early 80’s and quickly established myself in the business. The industry was different back then. Since technology and media weren’t accessible to people like they are today, the industry had more control over the public and had the means to influence them anyway it wanted. This may explain why in early 1991, I was invited to attend a closed door meeting with a small group of music business insiders to discuss rap music’s new direction. Little did I know that we would be asked to participate in one of the most unethical and destructive business practice I’ve ever seen.

The meeting was held at a private residence on the outskirts of Los Angeles. I remember about 25 to 30 people being there, most of them familiar faces. Speaking to those I knew, we joked about the theme of the meeting as many of us did not care for rap music and failed to see the purpose of being invited to a private gathering to discuss its future….

Real talk from some vets in the game.

This even sounds better live, so he gets a huge pass for looking like ODB in this rousing performance of his hit single ‘i’ on snl.

Snoop Dogg kicks off the Blazed and Confused tour from his closet.

Some heat from Cali’s newest young gun, who will have a huge year in ’09. Check out his social network slausonboy.com and get ready for the launch of nipseyhussle.com in a matter of hours. 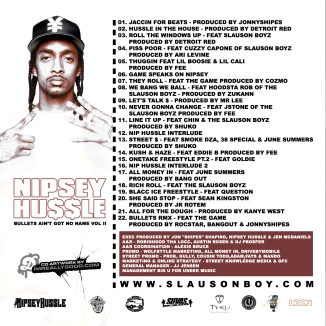 It has been brought to our attention by Eurweb.com that the former King of Hooks, Nate Dogg was hospitalized last month with stroke related symptoms.  Circulating speculation had it reported as a heart attack, but members of Nate’s gospel group Innate Praise have confirmed it was symptoms of a stroke that landed the R&B crooner in the hospital for seven days, starting on Dec. 19th.  Let us all pray that Nate recovers fully and gets his title back from T-Pain, who currently has the game of R&B hooks in the figure four.

Like Father Like Son…well in this case, like daughter.  Dr. Dre’s babygirl, Manaj wants to follow in her daddy’s footsteps and explore a recording career.  She has taken it one step further though and compiled enough footage on her family and super-reclusive father that she is prepping “Daddy’s Shadow” a documentary style expose on the Good Doctor.  Only thing is, Dre ain’t feelin that.  “My dad has cut me off (for) my involvement with the ‘Daddy’s Shadow’ project,” according to Manaj. For those who want to get a preview of this behind-the-scenes DVD, go to www.tmmediagroup.com to see the trailer.

Editor’s Note: As many will remember, little over a year ago a lyricist emerged out West bearing a striking resemblance to the Good Doctor, calling himself Hood Surgeon.  He claimed to be Dre’s son.  According to him, he didn’t receive his father’s blessings either.  Damn, by the sounds of things Dre’s reality show would be more exciting than Snoops on any given Sunday!