Alt-Right and white Supremacist leader Richard Spencer got clocked in the face during an interview earlier today at Donald Trump’s Inauguration.

So now he gets to inflict even more pain on the victims families.

22-year-old faces 33 charges of murder and hate crimes for shooting at Charleston church.

Tariq Nasheed recently revealed that the FBI knocked on his door asking about his affiliations. This was never proven to be 100% fact but if they are knocking at your door then they view you as some type of threat.

Neely Fuller jr explaining that any Black person speaking is being allowed to speak but if you are effective you better believe they are coming after you.

Neely Fuller jr explains that it is only when you admit that you are not as a strong that you become stronger. Get his books HERE...

Neely Fuller jr explains how prestige titles that Black people have mean under the system. As long as the system of white supremacy is in place and you do not threaten it, they don’t mind.

Pure unadulterated truth for that a**.

Neely Fuller explains that black people do not need to attend long speeches and secret meetings to get rid of racism. All we need to do is individually take charge of our lives with the goal of toppling down white supremacy

If you think these are the only marginalized racists and or white supremacists in this country you need to go listen to some Neely Fuller.

Keep sleeping but it will be at your own peril.

In rural South Africa the far-right Afrikaner Resistance Movement (AWB) is training thousands of white youth for a war between the races with military-style bootcamps where the Hunger Games meets Hitler Youth.
END_OF_DOCUMENT_TOKEN_TO_BE_REPLACED

King Noble gives a scathing response to the recently released video from Anonymous (though their official twitter account denies any involvement and have distanced themselves totally) which targets mega super star Kanye West. The original video is after the cut..

There seems to be some news coverage regarding '#Anonymous threatening Kanye West'. Please keep us out of this bullshit. Thx.

END_OF_DOCUMENT_TOKEN_TO_BE_REPLACED

WASHINGTON (CNN) — Hate crimes experts and law enforcement officials are closely watching white supremacists across the country as Barack Obama prepares next week to be sworn in as the first black president of the United States. 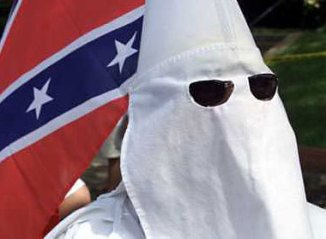 So far, there is no known organized effort to express opposition to Obama’s rise to the presidency other than a call by the National Knights of the Ku Klux Klan for its members to wear black armbands as well as fly the U.S. flag upside down on Inauguration Day and Obama’s first full day in office.

As Tuesday approaches, when Obama stands outside the Capitol to take the oath of office, experts expect anger about the new president to spike. But they don’t expect it to go away.

“The level of vitriol, I expect, will go up a bit more around inauguration time,” said Brian Levin, director of the Center for the Study of Hate and Extremism at California State University-San Bernardino.