Is Playstation even cool anymore? XBOX seems to be the go to machine after Playstation being dominant back in the day.

The live action Ghost Recon Future Soldier short movie was officially announced this weekend at Comic-Con 2010. Titled Ghost Recon Alpha, the movie is to be released next year and as previously mentioned is being directed by Francois Alaux.

This looks very cool. I will find some more concrete info about this in a few.

Live images have leaked of Sony‘s PSP Go, set to launch at next week’s E3. Looks like those rumors were true: It’s a UMD-less slider with 16GB of memory, and it’ll ship this fall. No price yet, but that should come with the official announcement next week. Update with video:

All this leakage stems from the June issue of Qore, which is a bit of a slip-up on Sony’s part. The Go looks to keep the single analog joystick, though the overall design is quite a bit more playful and, well, circular than previous iterations of the PSP. Notice we didn’t say “attractive”: the circle section that houses the start and select buttons especially has kind of a late-90s feel to it, but we’ll have to see how it looks in the hand. It should be packing Bluetooth and a memory card slot (probably MemoryStick, grah) in addition to the 16GB of internal memory.

Rockstar isn’t done supporting Grand Theft Auto IV. Today the company announced the next slice of the downloadable content coming “exclusively” to the Xbox 360, and boy is the name bound to draw some attention. Get ready to play The Ballad of Gay Tony.

“Grand Theft Auto IV‘s second downloadable episode,The Ballad of Gay Tony injects Liberty City with an overdose of guns, glitz, and grime,” the announcement says. “As Luis Lopez, part-time hoodlum and full-time assistant to legendary nightclub impresario Tony Prince (aka “Gay Tony”), players will struggle with the competing loyalties of family and friends, and with the uncertainty about who is real and who is fake in a world in which everyone has a price.” I have one word: fabulous.

The fascinating bit is that both this piece of content and The Lost and The Damned will be released as a retail product, on disc, for $39.99 at some point in the future. The disc will not require Grand Theft Auto IV to play, being a purely standalone product called Episodes from Liberty City. Pretty cool stuff.

Platforms: Arcade, PlayStation 3, Xbox 360 Posted: Release Date: TBA When it comes to fighting games, power is everything, and there are few punches with more power than that of the Iron Fist.

Remember Sony and Microsoft? No? Well, neither does the average Amazon customer. 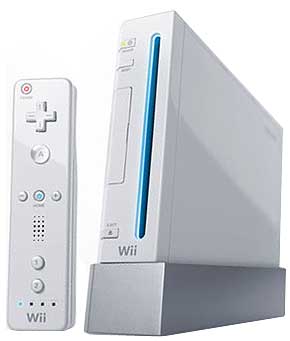 According to a release sent out by the online retail giant Friday, the Nintendo Wii and all its accessories dominated video game sales during the holiday shopping rush and not one mention was made of Sony’s Playstation 3 or Microsoft’s Xbox 360.

“Nintendo Wii dominated the top sellers in video games and hardware, including the Wii console, the Wii remote controller and the Wii nunchuk controller,” the release reports.

What about all its competitors? Have they somehow entered the realm of irrelevance?

I’m starting to wonder if they have.

A quick glance at console sales over the past year tells you everything you need to know about the video game hardware business. With 43.75 million units sold, the Wii easily dominates the market, which is also home to 26.49 million Xbox 360 units and 18.82 million Playstation 3 consoles. END_OF_DOCUMENT_TOKEN_TO_BE_REPLACED 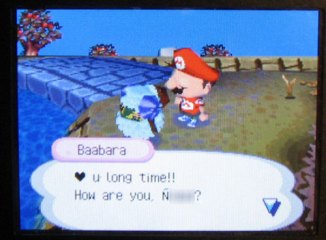 Video game companies send me games: not surprising. Yesterday, Nintendo sent me a game they played for me: say what?

In my mailbox yesterday was a copy of 2005’s “Animal Crossing: Wild World” for the DS out of the shrinkwrap and accompanied with a letter on Nintendo stationery written in the voice of the game’s Mayor Tortimer, encouraging me to use this copy of the game to import all of its unlocked items and its character to “Animal Crossing: City Folk” on the Wii.

Nintendo must have known that I’m terrible at “Animal Crossing” and thought I’d need help. So they unlocked a lot of content for me. They appear to have quite accidentally gotten a bit hip-hop about all this. Whoever played this game for me back at Nintendo trained at least one of the characters to greet me with the line [censored here]: “How are you, N—a?” END_OF_DOCUMENT_TOKEN_TO_BE_REPLACED

Machina reports “Supporting the ghost busting crew are the talents of Annie Potts, Brian Doyle Murray and William Atherton. Equipped with a variety of unique weapons and gadgets, players will hunt, fight and capture a wide range of supernatural villains in a funny and frightening battle to save New York City from its latest paranormal plague.”

It’s something you can’t get on the Roku. Nor on LG’s BD300. Nor on Samsung’s P2500 / P2550 Blu-ray players. Nor through Netflix’s own “Watch Instantly” portal. It’s high-def Netflix streaming, and it’s coming first to Microsoft’s Xbox 360. Just in case you glossed over this massively huge tidbit when digesting the new dashboard information this morning, we’re here to remind you that when the aforesaid dash hits on November 19th, with it will come HD Netflix streaming for (US-based, presumably) Xbox Live Gold members. You should know that this is only a “soft launch” with about 300 titles available for now, and the litany of details you’re surely craving simply aren’t available at present time. At any rate, we’d say things just got a lot more interesting in the world of digital downloads, but there’s really no need. The real question is: when will everyone else follow suit, and how quickly can we expect current Netflix streamers to get the HD upgrade?

Check out these wiimotes that have been pimped by fanboys and given features that surely take wireless gaming to another level. I wonder which of these will make it into mass production. The guys over at NINTENDOWIIFANBOY did a great job with this post and have two more wii models here..

Click here to see video of the mod in action.

Who can forget the Power Glove? Not us, and certainly not the Japanese hacker responsible for this functioning Power Glove/Wiimote hybrid.

What is the sound of one hand gaming?

This mod allows an individual to play Wii with only one hand. Created by Ryan Culy for a friend with a majority of his left arm missing, this mod is one of the feel good stories of this year.

This mod has a gutted Wiimote crammed into a metallic gun shell, complete with working trigger. For those that don't dig on Nintendo's Zapper and want something a bit more hefty and lifelike while they blast zombies in the face in House of the Dead, this might be the mod for you.

Mercenaries 2 dropped this week, I’m thinking about getting it before Star Wars: The Force Unleashed.

Resident Evil 5: The long lasting franchise returns to all next gen systems in 2009 and it’s looking fresh!

LOS ANGELES (Reuters) – Microsoft Corp plans to cut the price of its best-selling Xbox 360 Pro model by $50, to $299 in the next few weeks, the Hollywood Reporter reported citing anonymous sources.

The price cut for the Xbox 360 model with the 20 gigabyte hard drive will come before the video game industry’s biggest trade show, E3, taking place in Los Angeles on July 15-17, the report said.

A Microsoft spokeswoman declined to comment on the report.
END_OF_DOCUMENT_TOKEN_TO_BE_REPLACED

Google just announced its odd Google Media Server, a Windows app that finds photos, music, and video and makes it available to DLNA devices like the PlayStation 3, XBox 360, and most Media Center PCs.

Google Media Server is a Windows application that aims to bridge the gap between Google and your TV. It uses Google Desktop technology such as Desktop gadgets for the administration tool and Google Desktop Search to locate media files. All you need is a PC running Google Desktop and a UPnP-enabled device (e.g. a PlayStation 3). At the touch of a button, you can then:* Access videos, music, and photos stored on your PC* View Picasa Web Albums* Play your favorite YouTube videos
END_OF_DOCUMENT_TOKEN_TO_BE_REPLACED 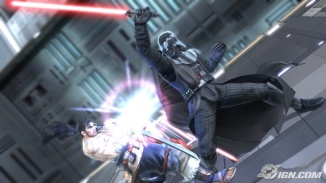 Just got these pics from the team at Blac Ren of the new Soul Calibur IV game coming on PS3 and X-Box.Yoda is the exclusive character for Xbox, while Darth Vader is for PS3. This is definetly a must have for long time Soul Calibur fans who have been following this legendary game for years.

In a year where entertainment has been shell shocked with the advent of Youtube and other video sharing sites, The Gaming industry has had its best year ever and doesn’t seem to be slowing down anytime soon. Full cheat codes and story at Yahoo Games..