Finally Lil B stop trolling the world and dropped a song that might just take him places he has never been before. Good work.

This is what you call ‘hops’. These college kids are constantly showing the NBA that the dunk contest can still be exciting without a bunch of unnecessary props.

After the shitstorm that ESPN anchor Stephen A. Smith caused on Friday with his comments regarding the punishment Baltimore Raven’s player Ray Rice for his assault of his wife in an elevator (who admittedly said she assaulted him first) very few jumped to his defense. View moderator and host Whoopi Goldberg took a stance defending Stephen A. Smith and made the bold statement that ” If You Hit a Man Don’t Be Surprised if He Hits Back ” on Monday’s broadcast. 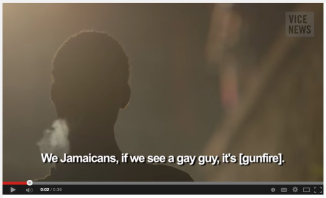 Vice News explores underground gay culture in Jamaica. Hit the jump to see the trailer to this highly controversial documentary, that is sure to cause a stir amongst those Jamaicans who are staunchly against gay and lesbian culture.

END_OF_DOCUMENT_TOKEN_TO_BE_REPLACED

The funniest man on the planet explains why he no longer smokes weed with Black People.

Bill Maher gives his take on Militarized Police Culture and Police Abuse in America after a ton of videos have gone viral of police abusing and even  killing citizens during arrests.

After being relieved as executive producer and writer of cult hit The Boondocks, Aaron McGruder returns with his off the wall comedy called Black Jesus set to bow on Adult Swim Thursday, August 7th, at 11p ET. Seems like there is a bunch of stereotypes in this expanded trailer but hopefully there will be some nuggets of wisdom in this and not just a retread of characters we have seen a million times.

Black Jesus is a half hour live-action scripted comedy series on Adult Swim from Peabody award-winning creator Aaron McGruder (The Boondocks, Red Tails) and Mike Clattenburg (Trailer Park Boys). The series finds Jesus living in present day Compton, CA on a daily mission to spread love and kindness throughout the neighborhood with the help of his small but loyal group of downtrodden followers. Check out the latest from Black jesus on AdultSwim.com.

This guy obviously watched too many American movies and doesn’t value his life too much. Cool video nonetheless.

Even the disabled can get it when they use racial epithets.

Rock-N-Jocks just got in the HOTTEST Lebron James shirt in the land. Get this Lebron James (THE RETURN) Clevland Cavaliers Adidas T-shirt only at http://www.rocknjcoks.com before they sell out!

Jay Elect and Hov get together at the 10th Anniversary of the Brooklyn Hip Hop Festival and give the crowd a rousing rendition of their freestyle to Drake and Soulja Boy’s “Nigga We Made It” and aptly changed it to “Brooklyn We Made It” for the hometown crowd.

Rock-N-Jocks has a big 20% off Entire Site 3 Days Sale only going on now. All fitteds, snapbacks, shirts, everything. Enter promo. code SAVINGS at checkout page. Hurry ends soon at www.rocknjocks.com

Funniest guy on the planet.

This took place on  6/24/14 and hopefully these shows will pop up on Comedy Central sooner than later.

Dame has been hitting on all cylinders with these interviews and I am gonna post every single one of them.

Dame Dash explains why he called music industry exec Lyor Cohen a “culture vulture” on Instagram, telling VladTV that he believes Lyor should move on from Hip-Hop and “stop raping our culture.” He then questions what Lyor and Joie Manda have contributed to Hip-Hop culture while holding higher positions at esteemed music labels.

Speaking about his own interaction with Cohen, Dame says that he’s never had a problem with Jay Z, and says Lyor “ruined” Roc-A-Fella Records. He also shares his thoughts on Lyor’s new label 300, saying that he’s probably “robbing whoever he’s in business with.” When Young Thug, who’s signed to 300, is brought up, Dame says the label might not be taking the Atlanta rapper on a ride, because he’s managed by Birdman.

At the end of the interview, Dame says that he believes label execs like Lyor and Joie should be questioned about their roles. He also adds that he can’t be blackballed by the execs, as they don’t cut his checks. 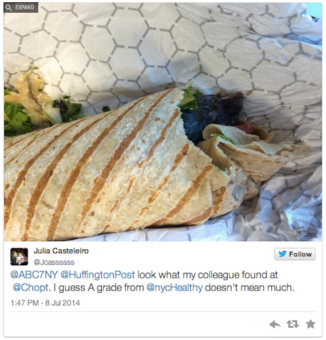 Not sure how much I believe this story due to the fact that the original photos taken posted by his friends were mysteriously deleted off the net. Not to say this can’t happen, because whether we like it or not, if you eat at a restaurant more than likely they have rodents but we would hope a damn mouse doesn’t actually make itself a part of the menu.

A patron of a New York City Chop’t restaurant—a “Creative Salad Company”—happened upon a disgusting dead rodent when chomping into his wrap on Tuesday. The wrap had been made by the Chop’t location in the Financial District of Manhattan.

END_OF_DOCUMENT_TOKEN_TO_BE_REPLACED

Lebron has some stiff competition in his road to being the first billionaire athlete after Forbes reported that global superstar Michael Jordan has now reached the billionaire boys club and his now former his teammate Shaquille O’ Neal is on pace as well.

He should of apologized a long time ago. The heat was coming and his Hip Hop pass was about to be revoked.

Plastic surgery experiment Joan Rivers arose out of  her shallowly grave to disrespect the President and First Lady.  Why does this old wench still get a pass?