Don’t mess with ‘Tin Man’ or your ass will be kicked.

Infamous photo of Air Force One

The presidential entourage will have 40 aircraft, including the Air Force One that will ferry the president. There will be six armoured cars, including four Barack Mobiles and a Cadillac.

Cadillac is equipped with a mini communication centre to enable Obama to be in touch with the White House, US vice president and the US strategic command. It also has the US nuke launch codes and it can withstand a chemical or germ warfare and a bomb attack. 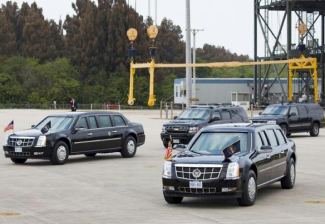 Two secret service command posts will be set up in Delhi and Mumbai to act as the communication nerve centres. These will monitor the president’s movement with real time satellite monitoring.

Three Marine One choppers will be reassembled in India to ferry the president and his family and to evacuate them in case of any emergency.

First they announced the walkman, now the turntable. I was surprised that they were still making walkmen, but this right here is truly the end of an era. I guess Fatbeats was the precursor to this more info below:

If you’ve ever been a DJ, known a DJ, or listened to a DJ, there’s a good chance you’re familiar with Technics. Panasonic’s analog turntables are legend among scratchers and spinners. And now they’re gone.

END_OF_DOCUMENT_TOKEN_TO_BE_REPLACED

Why do people use such a public forum as facebook to speak their private thoughts? Whether you agree or disagree with his stance you should not be on Facebook saying this as such and not expect a serious blow back from the public.

(CNN) — A school board district member in Arkansas who came under fire for an anti-gay post on a social networking site regrets the comments and will resign his seat, he told CNN’s Anderson Cooper on Thursday.

“I’m sorry I’ve hurt people with my comments,” Clint McCance, vice-president of the Midland School District in Pleasant Plains, Arkansas said. “I’m sorry I made those ignorant comments and hurt people on a broad spectrum.”
END_OF_DOCUMENT_TOKEN_TO_BE_REPLACED 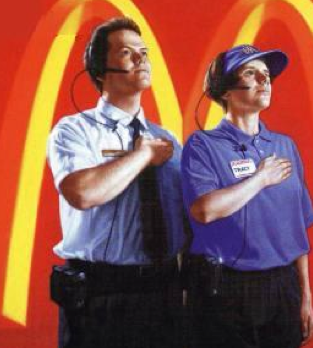 via Newser
A Brazilian court has ordered McDonald’s to pay a former franchise manager $17,500 because he gained 65 pounds while working there a dozen years. The 32-year-old man said he was forced to sample food products each day to ensure that quality standards remained high because McDonald’s hired “mystery clients” to randomly visit restaurants and report on the food, service and cleanliness.
END_OF_DOCUMENT_TOKEN_TO_BE_REPLACED

Saw a shortened version of these during the Magic game and had to post it cause it was dope. Not too sure on where they have taken the storyline but it seems like they have gonna the extra mile with these characters. Enjoy and may the force be with you(corny I know but I had to do it).

Coming this fall to NBA TV, a very tall cop and a very small cop team up to bring you the best buddy cop that anyone has ever seen. Chris Bosh stars as Chris Justice in Tall Justice.

Tall Justice with Chris Bosh (Funny or …, posted with vodpod

Nas was right. Hip Hop is Dead. Trust me I am with the fun and dancing part of Hip Hop but sometimes shit just gets outta hand.

After that bullshit by the LAPD concerning his case and it being dropped after all, I am back supporting Tip cause that was some bullshit straight up. Plus this song is dope.

Still on the fence about this one, and hopefully this is not the best part of the movie.

She is absolutely right, Whoopi is a major hypocrite for supporting Mel but walking out on Bill O’ Reilly who probably has views probably really in nature anyway.

The President goes on the ‘Daily Show’ with Jon Stewart to defend the first two years of his presidency, and what he plans to do for the remaining two years.

I guess people still used Limewire but I stopped many years ago when it became infected with viruses and a bunch of crap but it was the sh*t when it first came out. The music industry still dropped the ball on this because they had the first opportunity to use this technology and they balked and basically self destructed and will probably never recover.

Newser) – File-sharing site LimeWire has been effectively killed off by a court order. A federal judge has issued an injunction ordering the service to permanently disable its software and to end the sharing of unauthorized music files, the Wall Street Journal reports. The popular site was found liable for copyright infringement on a “massive scale” six months ago.

END_OF_DOCUMENT_TOKEN_TO_BE_REPLACED

I don’t have any lime green shirts but these are still dope.

Full of pleasant surprises, the 2010 Holiday season continues its intrigue as Jordan Brand announces the official retro if its Black/Altitude Green XIII model, the first since the sneaker’s original release in 2005. Slightly changed for 2010 (arguably for the better),

END_OF_DOCUMENT_TOKEN_TO_BE_REPLACED

I guess this is sorta of a big deal because this right now is the number #1 trending topic on Twitter.

It’s hard to believe that what we’re looking at is real — but we assure you, the picture above is in fact the PlayStation Phone you’ve long been waiting for.

END_OF_DOCUMENT_TOKEN_TO_BE_REPLACED

This stuff sounds real dangerous and will probably explode with all the press.  This basically red bull and alcohol together which is already popular combo in the clubs. Hit the jump for a video report from CNN.

END_OF_DOCUMENT_TOKEN_TO_BE_REPLACED

Do you even know anybody who owns a Zune? Sounds like the kids have been driving her crazy about the iPod thing.

Do you own an iPod, which is made by Apple?

END_OF_DOCUMENT_TOKEN_TO_BE_REPLACED

I just love how Lebron is facing all his critics head on. The shot at Charles Barkley is going to drive ‘Chuck’ crazy.

This isn’t about what LeBron James has done, or hasn’t done. This is about the difference between the expectations others may have of him versus the expectations he has of himself. What should he do? The answer is a question.
SOURCE:

Check out the second trailer to Russell Crowe’s(one of my favorite actors) new movie The Next Three Days.

The Next Three Days (featuring Russell …, posted with vodpod

If you want to rock like a champ then Rock-N-Jocks has got you covered with this just released custom Los Angeles Dodgers fitted done in the Champs Los Angeles Lakers Colors. This fitted is all Laker yellow with an all purple bill. The embroidered L.A. logo is in purple and outlined in white. It is limited to 30 total pieces. Get one while you can EXCLUSIVELY AND ONLY Place you will find this hat in the world is at http://www.rocknjocks.com 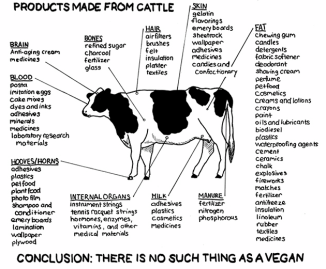 I always thought her story was bullshit and now it has come to past.

I have never seen a phenomenon like this cat right here. I don’t whether to take this serious or what but they are turning this cat into a cottage industry. How long till they hit a million dollars worth of Antoine related merchandise?

I guess Jay Z was wrong, in fact his D.O.A song probably made things worse.

Stop Lookin at my Moms!!!

These are super dope. They got  one for each team you can go grab a bunch here.

END_OF_DOCUMENT_TOKEN_TO_BE_REPLACED

I am kinda late on this but I had to post this cause it is just out of control.

Still have not figured out where he was going with this. You guys decide.

Where is all the f*cking money raised for Haiti? Where is Wyclef? Where is anybody?

Medical workers in quake-hit Haiti are fighting to stem a cholera epidemic that has killed nearly 200 people and sickened more than 2,000. . Follow us on twitter at http://twitter.com/itn_news .

via HYPEBEAST
Approaching 90 years in the business, American sportswear label Champion has collaborated with New Era on this fitted cap. The athletic-wear specialists seem to have enjoyed a slew of joint ventures of late, with this latest effort retaining the clean and simple approach adopted across those previous. The hat is emblazoned with a large stitched “C” logo and of course all the usual New Era branding. Look out for the Champion New Era fitted at New Era Japan from today.

Jump on this guys this is a great sale!!! 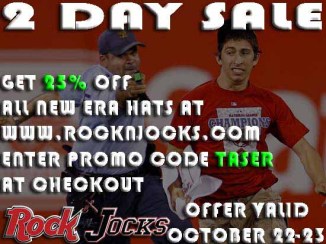 Rock-N-Jocks is having a huge 2 day sale. Save 25% off all New Era Fitteds by entering in promo. code TASER at the checkout page. Hurry sale is only from October 22nd-23rd. Get great deals only at www.rocknjocks.com

Is this dude from Lincoln Park?

An accused rapist had a violent outburst in an Oregon courtroom while his alleged victim was testifying. The man was eventually found guilty of sex abuse and tampering with a witness. (video altered at source) (Oct. 20)

Teenage Wasteland aka our educational system in this country has got massive problems that never seem to get addressed by our so-called politicians who are more concerned with a bunch of trivial bullshit.

“Abuse counselors are putting the word ‘drunkorexia’ in line with other eating disorders because the patient uses the same type of methods as anorexia and bulimia- they just mix it with alcohol too,” said Dr. Kevin Prince, Alcohol & Other Drug Education Program Coordinator at the University Health Services in Austin, Texas.
END_OF_DOCUMENT_TOKEN_TO_BE_REPLACED

Poor Mel. I guess the karma of being a racist, abusive asshole has come back to bite him.

“I thought Mel would have been great in the movie and I had the full backing of Jeff Robinov and his team. But I realize filmmaking is a collaborative effort, and this decision ultimately did not have the full support of my entire cast and crew.”

Juan Williams is a boot licking sellout and has some nerve saying this statement and I am glad he got canned. Video courtesy of Buzzfeed.

Juan Williams, fired by NPR today for honestly expressing his fear of scary Muslims in our nation’s skies, has now responded publicly, saying that his remark was “not a bigoted statement,” and faulting NPR for firing him without even letting him speak to them in person about it. (NPR says in a memo that it’s had “many conversations and warnings over the years” with Williams about his public statements). Also Bill O’Reilly is now leaping to Williams’ defense and calling for funding cuts for NPR, which is the official new talking point on this, apparently. Juan Williams’ future as a heroic favorite at Fox News is suddenly very clear.

Hey this my baby bro right here doing his thing.

If you been on this blog before, you know I am a massive Lebron James fan, where he goes I go so don’t be at all surprised by this post. I love the fact how he takes all of this negativity and uses it as motivation something I do in my life and it works well for me. Here Lebron exposes some of the racist tweets he has been getting and turns the tables on the ‘haters’. Funny thing is that the people who posted that stuff have deleted the tweets and twitter accounts and are now afraid of being exposed as the slim buckets they are. Lebron for the win! Hit the jump for the video report from ESPN: 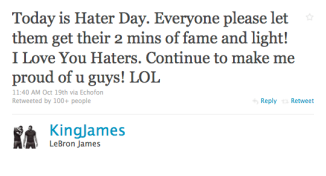