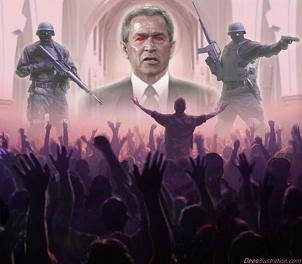 Could martial law ever become a reality in America? Some fear that any nuclear, biological or chemical attack on U.S. soil might trigger just that. KSLA News 12 has discovered that the 26,000 clergy has been enlisted to help the government with potentially their biggest problem: Us!!!
Charleton Heston’s now-famous speech before the National Rifle Association at a convention back in 2000 will forever be remembered as a stirring moment for all 2nd Amendment advocates. At the end of his remarks, Heston held up his antique rifle and told the crowd in his Moses-like voice, “over my cold, dead hands.”
While Heston, then serving as the NRA President, made those remarks in response to calls for more gun control laws at the time, those words live on. Heston’s declaration captured a truly American value: An over-arching desire to protect our freedoms to possess firearms

But gun confiscation is exactly what happened during the state of emergency following Hurricane Katrina in New Orleans, along with forced relocation. U.S. Troops also arrived, something far easier to do now, thanks to last year’s elimination of the 1878 Posse Comitatus act, which had formally forbade regular U.S. Army troops from policing on American soil.

If martial law were enacted here at home, like depicted in the movie “The Siege”, easing public fears and quelling dissent would be critical. And that’s exactly what the ‘Clergy Response Team’ helped accomplish in the wake of Katrina.
Dr. Durell Tuberville serves as chaplain for the Shreveport Fire Department and the Caddo Sheriff’s Office. Tuberville said of the clergy team’s mission, “the primary thing that we say to anybody is, ‘let’s cooperate and get this thing over with and then we’ll settle our differences once the crisis is over.’”
Such clergy response teams would walk a tight-rope during martial law between the demands of the government on the one side, versus the wishes of the public on the other. “In a lot of cases, these clergy would already be known in the neighborhoods in which they’re helping to diffuse that situation,” assured Sandy Davis. He serves as the director of the Caddo-Bossier Office of Homeland Security and Emergency Preparedness.
For the clergy team, one of the biggest tools that they will have in helping calm the public down or to obey the law is in the bible specifically Romans 13. Dr. Tuberville elaborated, “because the government’s established by the Lord, you know. And, that’s what we believe in the Christian faith. That’s what’s stated in the scripture.”
Civil rights advocates believe the amount of public cooperation during such a time of unrest may ultimately depend on how long they expect a suspension of citizen rights might last.

“Come out of Her My People, that ye be not partakers of her sins, and that ye receive not of her plagues.”

For her Sins have reached unto heaven, and Yah (GOD) hath remembered her iniquities.

Most of our people have nothing to lose if a national emergency is declared in your local area because we think we have little or nothing in material value and substance anyway. So we looked at Federal Emergency Management Association (FEMA) as a God-send in the event that a national or local crisis breaks out. However, the 800 camps are designed for your disposal will be concentration havens of absolute control, once you as a citizen lose and give over your rights and liberties…your children now removed from your care, family responsibilities forfeited, and you are remanded to male or female quarters, for an indefinite period of time…such isolated conditioning from normality is very similar to prison or confinement. In such emergencies money becomes obsolete, or immaterial to your personage, civilian life with no pro-bono benefits will heighten the slaughter of innocent victims who are not mentally able to deal with such hardship. The place used during the “Katrina” disaster was grossly unmanned in respect to security, and unsuitable to care for the families who were incarcerated there.

(pro bono) is a phrase derived from Latin meaning “for the public good.” The term is sometimes used to describe professional work undertaken voluntarily and without payment as a public service.

Like Katrina a state of emergency could be proclaimed from the result of a natural occurrence such as a hurricane, tornado etc. or any self-imposed consequence stirred-up by local government authorities to sustain and promote their expected goals and objectives…Agenda 21 is just one of the many esoteric agendas pre-planned to govern your state of affairs once your rights as a citizen is suspended. This day I place before you life or death you choose! “Come out of her my people, and promote a redemptive agenda for the God of our fathers (Yah Yisrael) or stay as you are and support the agenda of the powers that be that are planning your demise

Agenda 21 is a programme ran by the United Nations (UN) related to sustainable development. It is a comprehensive blueprint of action (Martial Law or emergency precautions) to be taken globally, nationally and locally by organizations of the UN, governments, and major groups in every area in which humans impact on the environmental destruction. The number 21 refers to the 21st century. The implementation of Agenda 21 was intended to involve state of the emergency action at international, national, regional and local levels. Some national and state governments have legislated or advised that local authorities take steps to implement the plan locally, as recommended in Chapter 28 of the document. Such programmes are often known as ‘Local Agenda 21’ or ‘LA21’